Debate "Should the SP function in a state of emergency?" - FLHS, Vidin

In their first argument, the proponents emphasized that in an emergency the school has not stopped working, but only changed the form of activity - distance learning, it is logical for the SP to continue its work in another form, using electronic devices.

In their second argument, the proponents argued that once the SP of Yordan Radichkov had committed to participate in the Region of Youth Participation project, in which many parliaments of schools in Bulgaria and Serbia work, it was not right to stop creating network initiatives, because it will make it harder for colleagues from other parliaments. And leaders must be responsible, no matter what difficulties they encounter.

In their third argument, the proponents shared that in the conditions of self-isolation the participation in the activity of the parliament gives the person a chance to live more fully, diversifying his daily life with something different from the school subjects and family responsibilities. In this way, they have the opportunity to create and develop their ideas for participation in initiatives such as "Deadly Candy", "Famous People and Events", "Healthy Food", "Banning Student Parliaments", and "COVID 19". This also leads to interesting communication with classmates when they discuss these initiatives in their classes in Facebook groups.

The deniers disagreed with this thesis and presented their arguments in defense of the thesis that in the conditions of the emergency situation the Student Parliament should not continue its work.

In their first argument, they reflected on the claim that students are overburdened with school-related obligations because teachers remotely give a huge amount of homework. Exhaustion is so great that members of parliament are over the limit of their mental and physical capabilities. They don't need to do anything extra, especially those time-consuming network project activities. As leaders, they must also be responsible for their own health.

In their second argument, the deniers stressed that the emergency had caught many people unprepared for electronic communication. There are many members of parliament who do not have the technical ability to engage in distance communication: some because they have brothers and sisters, who use the same training devices and they cannot take part in virtual meetings, others because they have a weak Internet or live in remote villages and do not have an Internet connection, they use only telephones, others - because they find it difficult to use Microsoft Teams, where we hold our meetings.

Therefore, it is best for the SP to stop its work during the emergency.

The proponents refuted these arguments, stating that not everyone in the Student Parliament was a random person, they were chosen by their classmates to represent the interests of the classes, so they could not stop working.

As children of the 21st century, high school students need to master modern technology, and if someone does not have such skills, now is the time to acquire them.

At the end of the debate, everyone agreed that the workload of students in distance learning is really much greater than in a real physical environment. But precisely because they are representatives of the SP, it is necessary to make more efforts than others and to continue to develop activities related to student self-government. 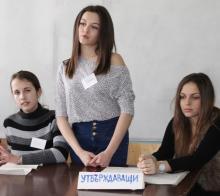 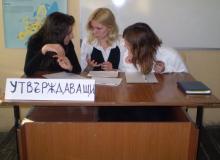